The Path To Forgiveness

Stars: Alex Coal, Cadence Lux, Joanna Angel, Kenzie Reeves, Kira Noir, London River, Scarlett Sage, Serena Blair, Whitney Wright, Daisy Taylor (Trans)
Categories: All Girl / Lesbian,
Description
Hayley (Cadence Lux) thinks she’s going to a music festival. She starts to suspect something is wrong when her mother (London River) takes a turn off the highway, and then into a facility called “Women for Wholeness.” She sees Mothers Sarah and Lauren (Joanna Angel and Serena Blair) in modest long black gowns, her girlfriend (Kira Noir) seems to be in cahoots with the women, as she steps behind them. Her mother informs her that she is being admitted, “to recognize God’s love.” A large man in overalls (Stef Onzo) is keeping a close eye on Hayley, and when she strongly objects, he picks her up and drops her on the tile floor. Mother Sarah exudes strict dominance, there is no way out of this situation. Every state holds their own jurisdiction, and in Utah, you can be committed if you are a threat to your own safety or others. And by threat, she means endangering the souls of others by thinking her sin is natural. Hayley meets the other young women in the facility: Christina (Scarlett Sage), Victoria (Daisy Taylor), Claire (Kenzie Reeves), and sisters Mallory and Valerie (Whitney Wright). The journey on the path to forgiveness is full of romance, repression, drama, and sex 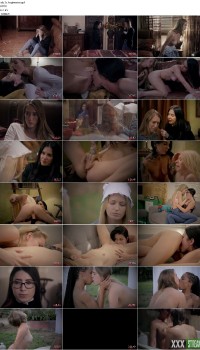