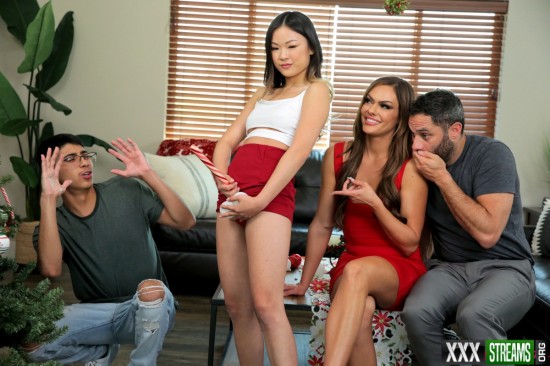 What would happen if four families each contributed one member to create a new family? In this episode of Family Swap, Lulu Chu and her swap brother Diego Perez are decorating the Christmas tree while their swap parents, Aila Donovan and Damon Dice, watch. Aila and Damon can’t stop Lulu from taunting her swap brother. Eventually, Lulu grabs a candy cane and pretends it’s a dick with the way she strokes it. As Lulu gets increasingly dirty with the candy cane, Aila eggs her on while Damon tells her to cut it out because it’s making poor Diego uncomfortable.

Later that night, Diego is sitting beneath the Christmas tree beating the meat when Lulu comes back out to check out the gifts beneath the tree. Diego tries to hide what he’s been up to, but his swap sister knows as soon as she spies him. Instead of being grossed out, Lulu is into it. She struts over to Diego and taunts him as she tugs his stiffie out so she can open wide for a Christmas handie and BJ. Diego capitulates easily, and both swapsibs get super into the moment. Neither of them know that Aila has come out from the bedroom to see what the commotion is. When Aila sees what Lulu and Diego are doing, she finds it hot as hell. Eventually, touching her own tits and cupping her own pussy aren’t enough for Aila. She makes herself known to Lulu and Diego so she can join Lulu in sucking that D.

Everyone is enjoying themselves until Damon comes out and spoils the mood by freaking out. Aila isn’t about to let that happen. She stops his tirade with a kiss, then gets down on her hands and knees to offer her pussy to her swap husband. Lulu follows suit, peeling her thong off so Diego can take whatever he wants. Presented with such a glorious sight, Damon can’t imagine not sticking it in, and neither can Diego. The guys take a seat on the couch so the girls can swap partners and sink down on those fuck sticks. Lulu loves Damon’s dick, and Aila enjoys dominating Diego. When the girls have tired of their reverse cowgirl stiffie rides, they switch back to their original partners to keep the party going in cowgirl. A final partner swap leaves the girls on their backs with Damon banging Lulu and Diego going to town on Aila until both men fill their partner with the gift of a big fat creampie. 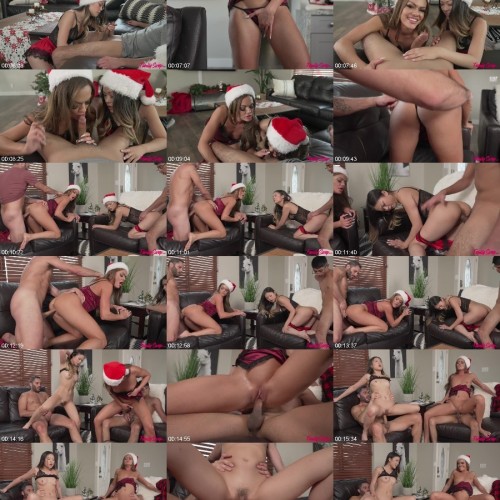